01 December 2020: Learmont’s nasty novel “Fair Chase” has now completed one year of carefully-targeted submissions to the market. The disturbing “sunlit noir” opus has drawn 26 polite, tactful and encouraging rejections. An equal number of literary gatekeepers did not reply, and are now on a “do not query” list. Learmont goes on, whistling merrily, into another year of vertiginous descents beyond the event horizons of publishing black holes.

25 November 2020: Tom hits the big time, with an article which appeared today on the prestigious First Rand website Perspectives. Slush Pile Blues is a tell-tale, no-holds-barred memoir of life on the sidelines, as an author struggles to get his first novel into print.

20 November 2020: Learmont is very proud of his talented niece Catriona Ward, who is rapidly building a successful literary career. She scared a big readership with her first novel Rawblood, and won the August Derleth Award in the UK. Her second novel Little Eve terrified even more people, and won her another “Derleth” plus a Shirley Jackson award in the States. And now Ms Ward is on a roll, because she succeeded in shredding the great Stephen King’s nerves with her latest disturbing opus: The Last House on Needless Street.

19 November 2020: Tom’s chilling story The Beast was posted by the continent-wide online African literary journal The Kalahari Review . This is the eerie tale of a man caught between two very different worlds, a chapter from the composite novel Radium Nights. Thus far, it’s the sixth extract to be published from a book which frightens off literary agents and publishers, but never fails to interest short story editors. At this rate, Tom wonders if he’ll eventually get the entire novel published piecemeal. Readers who might enjoy a frisson on the moonlit fringes of the Kalahari Desert should click HERE.

23 September 2020: A number of Learmont’s recent books may not be mentioned, because he has signed non-disclosure agreements with the clients who commissioned them. In the last two years he has delivered a mystery romance, a celebrity biography, a fantasy with airships and dragons, a jungle adventure, a YA school novel. He also collaborated anonymously on two screenplays, SF and horror. Current work includes collaboration on a historical trilogy, and it’s nice to keep the keyboard clattering through the Covid 19 plague with the usual edit jobs.

21 March 2020: Dear Members and friends of SFFSA, March’s meeting will take place at Nexus in Randburg on Saturday the 21st March at 17h30 for 18h00. This month’s meeting will be a talk by Tom Learmont on “The Real Science Fiction” The Nexus 21, Harley St. Ferndale Randburg. We’ll follow this with supper and discussion. As Nexus is not licensed please bring along your own alcohol, but do not bring cool drinks and snacks. Cost R10 for members, R20 for non-members. Please remember there is extra parking across the road. For more phone Ian on 083 523 0081 www.sffsa.org.za Hope to see you there – SFFSA Committee. TALK WAS POSTPONED ON ACCOUNT OF VIRUS.

16 March 2020: This portrait was taken by ace photographer Tommaso Fiscaletti while his collaborator Nic Grobler interviewed Tom for Hemelliggaam, a vast endeavour which attempts to connect heaven and earth. It’s on display in a gallery at Taormina in Sicily.

19 November 2019: As Learmont begins to carpet bomb agents and publishers on three continents with submissions of Fair Chase , he falls back on an old quote that sustains and consoles him at such times. From Richard Rorty, in his introduction to the 1992 Everyman’s Library edition of Vladimir Nabokov’s Pale Fire, it reads as follows: Judicious reviewers must presuppose that nothing genuinely new can be written, for only on that assumption are they in a position to judge, and in no danger of being judged by, the book they are reviewing. Like the judicious reviewer, the common reader is made nervous by books that are insufficiently like the books he or she has read in the past.

29 August 2019: Time to catch up, after a long period full of distractions, including a flit to a new flat which ate up a lot of hours, and a long list of freelance projects, mainly fiction edits which ended my 2018 with a word count of 750 000. So far this year I’ve managed to write three novels for separate US publishers under non-disclosure agreements, and am now about to start on a fourth. Meanwhile, I’ve been working with a US client on an SF screenplay, and finishing my own Fair Chase, with only two chapters left to write.

15 July 2019: Let’s hear it for my unstoppable, talented niece Catriona Ward.  She got the August Derleth Award in the UK for her chilling first novel Rawblood. Now she’s scooped the Shirley Jackson Award in the US with her second novel Little Eve. Way to go, Cat!!

20 May 2018: A busy year so far, with fiction edits and ghosting a-plenty. One project I  completed last week was a 60k novel that took me 42 days. Now I know what nanowrimo feels like! When there’s a gap, I put in some work on my horror opus, Fair Chase. 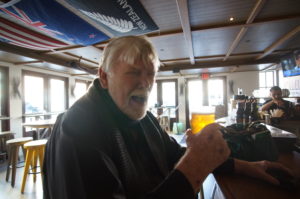 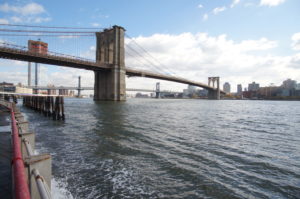 The doomed Crane plays a major role in the novel’s mystery plot. His masterpiece, The Bridge, was inspired by this “great steel harp, stroked by oceanic winds”, which overlooks South Street: the Brooklyn Bridge.

19 October 2017: Tom’s Rogue Male will be given away FREE on Kindle for the next five days. All he asks in return from a reader is a review, good, bad or indifferent.  This has been a busy year so far, with a lot of editing projects that came through PASA, including two massive thrillers by a pair of talented authors. No names, no pack drill!

March 2017: The US release date of  The Girl from Rawblood.  Last year, the UK edition won the 2016 August Derleth Award. The  author is Learmont’s talented niece Catriona Ward.  As eerie winds howl across wintry Dartmoor, she’s huddled in the warm kitchen of an ancient Devon vicarage, hard at work on the edit of her second novel, and bracing herself for the American launch. Uncle Tom wishes her a million sales!

January 2017:  Tom is registered as a freelance consultant with The Publishers’ Association of South Africa.

7 January 2017: Asked about past or future ghostwriting assignments, Learmont
disavowed all knowledge, but added this link.

26 October 2016: The launch date of an important and topical book by political analyst Ralph Mathekga:  When Zuma Goes,  published by Tafelberg.  Learmont played a role in the genesis of the book, and says it repays a very close reading. 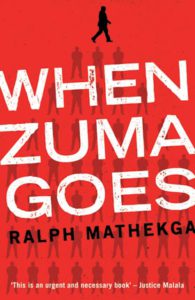 4 October 2016: Now available on Kindle: Tom’s naughty Rogue Male:  Sex and survival for the newly-single man. It’s a map of the jungle out there. 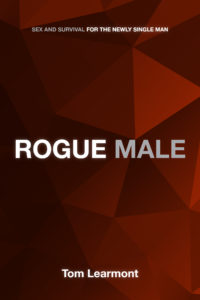 1 September 2016: There’s an sf story signed by Tom Learmont in the latest issue of the hot new UK quarterly, The Singularity.

3 October 2015: The first chapter of Learmont’s War Across Time was featured in the  Friday Fiction  spot on the Books Live site.

4 September 2015:  Tom is downright chuffed  to see his niece Catriona hitting the headlines with her first novel, Rawblood,  published by Weidenfeld and Nicolson.

It’s a masterful re-imagining of the ghost story, drawing on the tradition of Sarah Waters, Daphne du Maurier and Hilary Mantel. By turns chilling, bleak and tender, Rawblood is a powerful evocation of the horror of loss, and a gothic parable with a devastating twist.

So, if you’re in London, and enjoy being scared witless, take up this invitation for the 23rd. 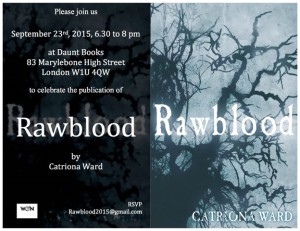 25 August 2015: Learmont is back in the hurly-burly again, after an extended period of meditation which he spent in his Antarctic Dome of Solitude. And now he is once more  ready to weave colourful threads into the broad and vulgar tapestry of Johannesburg life.

22 December 2013: Tom Learmont was tickled pink to hear his name as a song title. It’s by Markus Kuhlmann and the group Weeds Grow Apace, on an album entitled Lachrymose. Click through to enjoy Tom Learmont!

22 November 2013: Learmont was in London as a participant in the South Bank SF Seminar convened by the polymesmeric Lavie Tidhar. High point of the event was an insightful contribution from Jay Caselberg.

21 September 2013: The annual Minicon of Science Fiction and Fantasy South Africa had Tom Learmont on the bill with a talk entitled: THE INTELLIGENT WOMAN’S GUIDE TO FLYING SAUCERS — Or how to tell real Science Fiction from Fong Kong space trash.

16 September 2013: The second edition of Prufrock the stunning new literary quarterly is out today. There’s a contribution from Learmont called Murenga, adapted from a chapter of Radium Nights.

23 December 2012: Kwela Books has released a watermarked PDF review copy of Light Across Time as an ebook.  Bona fide book bloggers and literary sites may  request a free copy from learmont@discobolus.co.za.

3 December 2012: Radium Nights is  ready for inspection by agents and publishers. Click through to read a chapter called The Aviator’s Tale.

7 August 2012: Morrie and the Grand Potato is a story by Learmont, now featured on the  World SF Blog.

30 June 2012: Jungle Jim issue 14 is now available on Kindle, with Learmont’s tale The Cave of Kokwana .

1 February 2012: Learmont has started keeping an infrequent  blog on this site. He calls it: A Sense of Wonder.

23 November 2011: The Citizen calls Light Across Time  “a high-flying novel“ and says: It takes a writer’s courage to create a plot with such an intricate mix of situations and succeed  in making a story out of it.  Learmont is a virtuoso with the English language, which makes reading the book a double pleasure. 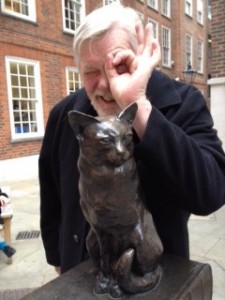 12 November 2011:  The ebook version of Light Across Time is now sold in the UK and elsewhere by the Book Depository.

23 October 2011:  I’ve just finished, in two large gulps, Tom Learmont’s novel Light Across Time. Anyone who can stitch together time-travel, Nabokov, London pubs, hijacking, Free State vistas and Joburg’s Radium Beer Hall – an old haunt of mine – gets my vote. It is a wonderful piece of work. Christopher Hope interviewed in The Sunday Times.

13 October 2011:  Light Across Time is now available as an ebook from Barnes & Noble in the US. Download the free B&N Nook apps, and read Tom Learmont’s “sweeping sci-fi saga” on iPhone, iPad, Android, PC and Mac – without needing a Kindle.

12 October 2011: Learmont is encouraged by  the two types of review Light Across Time has been getting:  either highly favourable,  or sneering and dismissive. This extreme polarisation in critical opinion is said to indicate that a work is on the cutting edge.

AND… a four-star review from HEAT: This is very accessible science fiction, even for those who don’t like  the genre.

12 August 2011: An excellent review in The Star by Jenny de Klerk. Also on Artslink. A sweeping SA sci-fi saga…

10 July 2011: Award-winning writer Liz Pienaar and her partner Justin Mueller hosted a Sunday “sop en dop” book launch for Light Across Time at ADS in Oaklands, Johannesburg. Sop was supplied by Harriet Pienaar and the dop was by courtesy of Leopards Leap. Stills by Paul Paddington and video coverage by Keith Page. 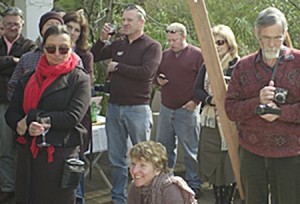 Tom Learmont, current newspaper man, and long-standing regular at The Radium, delivered a rollicking speech during his launch of “Light Across Time” yesterday. Great historical perspective about the sci-fi genre and his  efforts to entertain and educate international audiences. Tom’s humour and humanity have echoes of Kurt Vonnegut. (Margaret o’ Connor)

6 July 2011: KIRBY vd MERWE  interviewed Tom Learmont in Afrikaans, for the supplement By, which appears in several papers including Beeld and Die Burger: “I am in the Springtime of my senescence…”  Read more…

20 June 2011: Light Across Time has been published and is available in most bookshops – and by mail order from online retailers.

16 January 2011: Tom Learmont has signed a world rights contract with Kwela Books for his novel Light Across Time. Kwela’s offer for the scientific romance came after enthusiastic recommendations from two publishers’ readers. Learmont is happy with the terms because there is no literary agent to take a cut; and also because Kwela has an excellent reputation as a house which promotes authors aggressively and stays loyal to backlist titles.